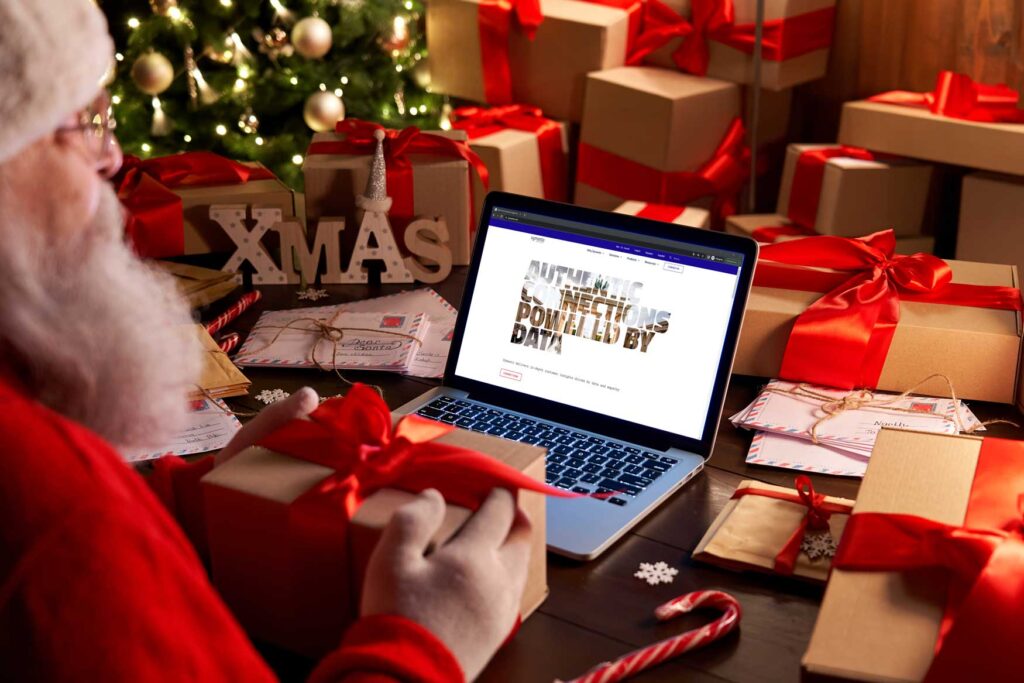 With the jingle-sniffles pandemic under control, and the elves happier than ever thanks to Symanto, Santa was looking forward to a drama-free Christmas 2022. Little did he know that a Machiavellian plot was underway that threatened to sully Santa’s good name, and ruin Christmas forever.

It was January 2022 and Mr and Mrs Claus were sitting by a roaring fire, faces beaming as they made their way through a huge sack of Thank You letters from children from all around the world. Santa was pleased to read that all his presents had arrived safely and on time.

The trust of good boys and girls is of utmost importance to Santa. Parents wouldn’t let him come down their chimney each year if it weren’t for his pristine reputation and impeccable morals, and Santa never took that fact for granted.

He reached into his sack for another letter and pulled out a very special, gilded envelope with Santa’s name in swirly writing. He turned it over and inspected the peculiar wax seal with the word “Magik.Ko” stamped into it.

Santa adjusted his half-moon spectacles and leaned forward in his armchair, intrigued to find out what this special letter contained.

I’ve been an admirer of your work for as long as I can remember, and, like you, I’ve made it my life’s mission to spread wintertime magic to boys and girls around the world. For decades now, Magik.ko has inspired children to be on their best behaviour with our special brand of enchantment.

We’re in the same business, which is why I’m approaching you now with a merger proposition. We’d be absolutely delighted to join forces with you.

Just think, with your name behind us, we’ll be able to double the wonder and joy felt at this time of year.

I eagerly await your response with faith and hope that winter 2022 will be the most magical yet.

“Ho Ho How delightful!” Santa boomed after he’d finished reading the letter aloud to Mrs Claus. “This Magik.ko sounds wonderful. What do you say?”

“Hmmm,” Mrs Claus pondered warily, “perhaps a little too wonderful.” She couldn’t help but feel that something was amiss. “How come we haven’t heard of this Magik.ko before?”

Santa, who always wants to see the good in everyone, replied “Why, December is our busiest time of year, we may have been a little too occupied to notice.” Noticing Mrs Claus remained unconvinced, Santa continued, “Of course, I’ll get the elves to run a due diligence check on this Magik.ko.”

“Thank you, dearest” Mrs Claus gave a sigh of relief as she reached for the next letter.

And so the elves got straight to work.

First they ran the name S.P.MARK through the naughty list, which returned no results.

Then, they investigated the Magik.ko website. “What’s Winter Without a Little Magik.ko?” read the hero title, accompanied by an image of three rosy-cheeked children wrapped up in cosy scarves and hats.

“This certainly seems on-brand for us” said Santa.

Mrs Claus furrowed her brow. “What do the parents say online?”

Using a free social listening tool, the elves searched for mentions of Magik.ko online and found that brand mentions peaked on December the 5th and 6th.

“Just as I suspected,” said Santa, “December, our busiest time. And look at the sentiment wordcloud!”

Mrs Claus saw the words “good” and “children” in big green font. She could see that her husband was buzzing at the prospect of the merger, but something just didn’t sit right with her.

“Still,” she said, “I’d feel much better if we could run it by Symanto. Just to be on the safe side.”

Santa’s excitement gave way to compassion on seeing the concern on his wife’s face. Mrs Claus’s intuition was rarely wrong. He knew it made sense both for his reputation and their relationship to seek a second opinion from Symanto.

We were in the middle of taking down the Christmas decorations in Symanto HQ when we received the call. We hardly expected to hear from Santa so soon! But when he explained the situation and Mrs Claus’ apprehension, we knew they’d come to the right place.

We ran a full Due Diligence with Brand Health report to explore how parents really felt about Magik.ko. We crawled thousands of online conversations in 50+ languages. What we uncovered was shocking.

All of the parents’ comments registered as having an intensely negative emotion, either fear or anger. Although many mentioned the word “good”, Symanto’s advanced sentiment detection identified the word was used in a very negative context:

“Children, please, please be good for Magik.ko, I urge you!”

“Magik.ko, I promise my children are good, please don’t do anything to them”

“This December, remember children, if you are good, Magik.ko won’t take you away”

Santa was flabbergasted upon seeing the results of our Due Diligence report. “What kind of evil is at work here?”

Santa vowed to march straight to Magik.ko headquarters and give this S.P.MARK a piece of his mind.

Magik.ko’s fake branding didn’t extend to their headquarters. There was nothing jolly or festive about the barbed wire and tall iron railings that surrounded the complex. Unperturbed, Santa barrelled straight into the building.

Looking down the corridor, he saw a door with S.P.MARK written on the glass and made a B-line for his office before anyone could intervene.

S.P.MARK was hurriedly putting on a red Santa hat under his desk when Santa threw open the door.

“I demand to know, who you are and what this is all about?” Santa slammed the merger proposal down on the desk.

“Now, now, Santa, I’m sure there’s been some misunderstanding” a forked tongue flickered between S.P.MARK’s pointed teeth, and something about his hairy face was oddly familiar to Santa.

“Misunderstanding my foot! You’re scaring people, and I want nothing to do with it!”

“You know, Santa. You and I are not that different. Like you, all I want is for children to behave. You and I use magic to make that happen. Only you use candy canes and well… I use a birch canes” he cackled.

Disgusted, Santa turned to leave when he saw the name “S.P.MARK” backwards through the glass on the door. “KRAM.P.S.” Of course!

“Urgh, yes, the jig is up.” Krampus pulled off his hat to reveal two large horns. “I almost had you though, didn’t I? The precious, perfect, beloved name of Santa was almost ruined forever.”

It suddenly dawned on Santa that the Krampus was right. If it hadn’t been for Mrs Claus’s intuition and Symanto’s thorough due diligence, his reputation would’ve been in tatters. Then who would give the children their presents at Christmas? The parents? Where’s the magic in that?

Humbled, Santa looked at Krampus in pity. “I know that with my brand of magic I can’t stop you from doing evil things, but I can bring happiness to children each year, and I’ll do everything I can to protect that.”

With that, Santa walked out with his head held high, thinking about the big hug he was going to give Mrs Claus when he got back to Rovaniemi, and the thank you note he would write to us at Symanto for saving Christmas…yet again.

‘Tis Always the Season for Symanto

While sneak-peaking at your presents before Christmas is completely off-limits, it’s always a good time to get deep insights into consumer perceptions, and that’s exactly what we offer year-round.

Rip off the wrapping paper and get to the heart of what consumers are saying in minutes.

Whether you’re running due diligence for a merger or acquisition or investigating an investment opportunity, let our AI magic work for you.

Get in touch to find out more.